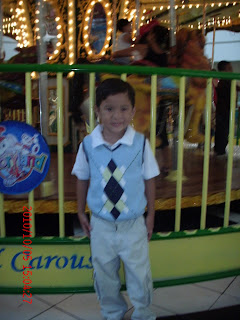 I admit I am guilty; I have been spending too much time writing articles; I forgot to double check Jeon's assignments. I became complacent because my hubby was here and he was the one helping Jeon out with his school works. Morning of October 5th, I read Lani's (Jeon's classmate Leanne's mom) comment on my Facebook status. She was asking me if I will go with my son at SM Clark for the school program. I became frantic after reading it. I didn't know that he is part of the school program. I asked my hubby if he read about it in our son's reminder notebooks. He said he didn't. Immediately I sent SMS to my cousin who is a teacher in that school. She confirmed that there is a school program scheduled that day. Even though I was not really feeling well that time, I prepared to attend the event. Just in time when my son came back from school. He said that he is part of the program but does not know what to wear. OMG! What am I supposed to do? My hubby decided that he wears smart casual outfit and to bring the PE uniform. It was the right decision, because they don't have costume, they just need to wear the best outfit. 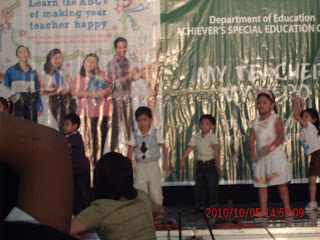 To make the long story short, we made it through the event. My hubby and are were really proud to see our youngest son dance on the stage. All smiles and doing his best in this Teacher's Day event. Our frowns and worries before the event started were changed into big smiles.