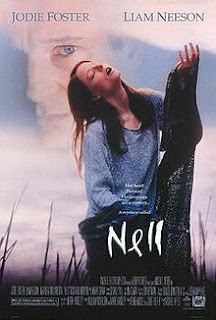 In 1994, the movie "Nell" won the Best Actress award for Jodi Foster. In this week's TCP theme, it is all about movies which won Best Actress award. I remember watching this film in the movie house with my cousins. I think this movie came after another very good movie Schindler's List.
Here is the plot of the movie based on Wikipedia:
"When stroke victim Violet Kellty dies in her home in the North Carolina forest, the town doctor, Jerry Lovell (Liam Neeson), finds a terrified young woman hiding in the rafters of the house. She speaks angrily and rapidly, but seems to have a language of her own. Looking at Violet's Bible, he finds a note asking whoever finds it to look after her daughter, Nell. The sheriff shows him a news clipping from which he surmises that Nell (Jodie Foster) is the dead woman’s daughter, conceived by a rapist.
Jerry seeks the help of Dr. Paula Olsen (Natasha Richardson), a researcher working with autistic children. Almost immediately Paula discovers that Nell's language is English, based partly on her mother's aphasic speech after a stroke. Jerry and Paula begin a grudging friendship, although he detests her coldly clinical, analytical tactics."
This is a must see movie and I suggest if you can find a copy of this film take time to watch it  and you will definitely be moved by the excellent acting prowess of Jodi Foster. There is no doubt she truly deserved the Best Actress award.
For other interesting and award winning movies, check out other TCP entries.