Mommy and Me Monday: Thank God It's Saturday @ TGIF

My hubby was not feeling well last week, so when Saturday came and he was feeling a lot better; we decided to dine out. The kids were busy playing the PS2 when we told them to dress up. As expected, my toddler would have his tantrums saying that they are busy playing and they would rather stay home. But when his elder brothers started to get ready, the little boy had no choice but to comply.
We decided to visit Marquee Mall (the Ayala Mall in Angeles City); and check out the best place to dine. Then I told hubby to bring the kids to TGIF. I guess we made the right choice, because Jeon (our little boy) enjoyed the place and the food. In fact he was so awed we the place and he kept on saying the place looks good and he likes it.
Here are the pix of the pre-schooler who didn't want to leave his PS2 behind; you be the judge whether the kiddo enjoyed his stay at the mall and at the resto. 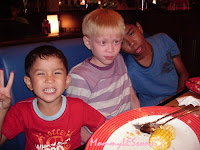 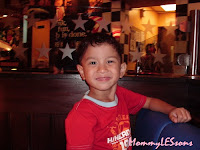 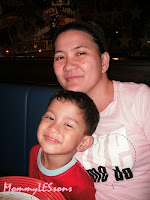 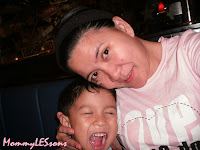 I guess the pix will speak for itself, the pre-schooler did have a great time, am I right?

Hosted by Krystyn at Really, Are You Serious?
Posted by Marana at 3:47 PM

Labels: mommy and me monday