I have started this blog March 2008 under the blog  title "Maskinanu", but I half-heartedly update it. Finally, this blog was resurrected last September 2010 carrying a new blog title "MommyLESsons". Since then, I have been trying my best to keep the blog updated,  I also started to join memes and advertise in order to gain more traffic for the site. 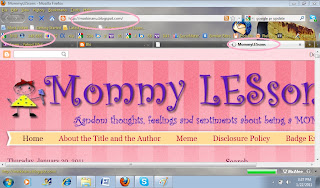 I
After a couple of months of serious blogging, I have seen fruits of my hardwork. First, was my Alexa points improved a lot, it is now at 345K. And now, when Google made a Page Rank update this month of 2011; MommyLESsons (maskinanu.blogspot.com) no longer shows N/A , it is now at PR0.
Hopefully, the next time Google would update Page Rank ; I would  see more improvements. So far, so good; I think I am on the right track.
Posted by Marana at 11:45 PM