If budget is not an issue when it comes to buying Christmas gifts; you may want to know what are the most popular Christmas gifts available in the market today. Of course, those cool gadgets would be on top of the list. 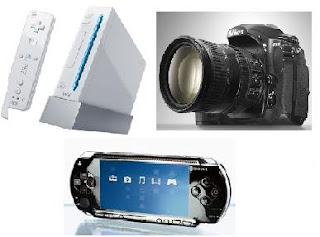 I would definitely like to give myself that Nintendo Wii. I need to workout but I don't like going out; so Nintendo Wii would be perfect for me!

My hubby would love to have one of those DSLR camera. That thing was on top of his Christmas wish list for the past two years. But we need to set our priorities, so we had to get a new house first (it's a housing loan!).

For my three kids? they would reply in unison - PSP! Regarding this matter, we have the budget to buy them PSP but we opted not to. We want them to go out and enjoy playing with real people rather than be stuck at home playing an electronic gadget.