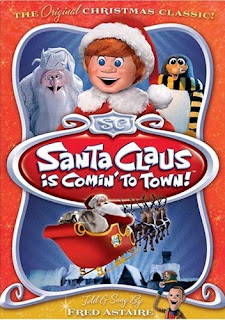 I had a hard time deciding on what Santa  movie to post; because I haven't seen any except the movie Santa Clause. As I was checking the net for some photos of my chosen movie; I came across this very old Santa Claus movie entitled Santa Claus Is Comin' to Town. Although I have not seen the movie yet, but I would definitely try to download this movie so me and my kids can watch it. This was made before the 3D animated film came to life.

Santa Claus Is Comin' to Town is a 1970 stop motion TV special and it used models carved from wood this is made by Rankin-Bass. The special was starred by Hollywood actor Fred Astaire who was the voice of S.D. Kluger and he was also the narrator of the stop motion special. The voice of Mickey Rooney was used for Santa Claus / Kris Kringle. The film tells us about the traditions that we have during Christmas and gives us the story of Santa Claus too.